I fully intended for my next project to be a new home in Calistoga with an unlimited budget or some cool artist lofts in Oakland….anything to keep me busy and upwardly mobile on my architectural path.

But instead I find myself yet again, working on something entirely non-billable that stirs great passion in me.  This sounds more like the work of a fine artist and indeed this may help me explain to my accountant the unpredictable profit and loss reports for Laraarchitecture.

So today, rather than yet another blog on countertops and wood species, I’d like to share with you something I am working on that is really important.

The Crosses of Lafayette are rotting, have you noticed?

It seems that the tragic cost of war has faded in many minds and the work parties and vigils are less attended.   The Crosses have become close to impossible to maintain to a small group of heroic founders that are aging and growing weary of climbing the  25% grade in order to battle the weeds and repair broken crosses. Then there is Mother Nature who is beckoning the crosses to become earth again.  A decade of erosion, alternating seasons of heavy rains, drought, and the ceaseless threat of fire

So while the Crosses are being thinned out in order to make maintenance easier, the death toll continues. Haven’t you ever wondered what the hillside would look like if the accurate amount of crosses were displayed? How many more crosses would it take to shock us?  Instead, most of us drive by doing our countless errands and commutes, all the while, the future of the memorial becomes more and more uncertain.

The hillside, once a polarizing topic, has evolved into a beloved place of mourning for gold star families and a source of civic pride for our community.   Many still believe they are ugly and sad and don’t belong in Lafayette but in DC somewhere.   Of course they belong ONLY here, a stone’s throw from Whole Foods and our top rated schools.   There is always a fair share of publicity for the Crosses having been featured in the NY times and covered by international news sources……….. but lately the spotlight has faded.

So what may have begun as a contentious grassroots protest, like many things at the edge of controversy, over time has become accepted and old news, even institutionalized.

I probably don’t need to spell out the parallels that face our country right now.

So I am called to give the hillside a makeover.  I will do so with a conceptual installation in the contrasting environment of a white prestigious gallery.  I will turn the hillside inside out, abstract it, duplicate it and otherwise manipulate it so that a more accurate number of crosses is represented and so that it’s beauty and message are again remarked upon.

I will call it the Peace Chamber because you will not be allowed out without looking.  It will be about war for many but for others is will be about what they find in the mirror.

I am relieved to be making something with my hands at this time rather than marching or whining about the election or worrying.  For me, this is a project that defies categorization; it is a true hybrid of place making, architecture and art and I have been at it for years.  Here is a little bit of the history. 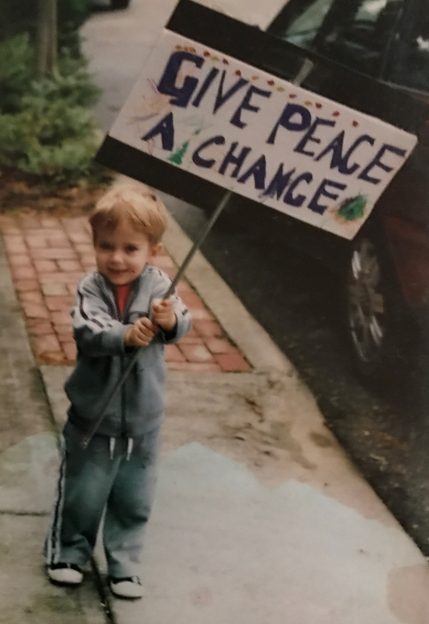 My oldest son, Nick, on our way to protest the Iraq War in San Francisco in 2003 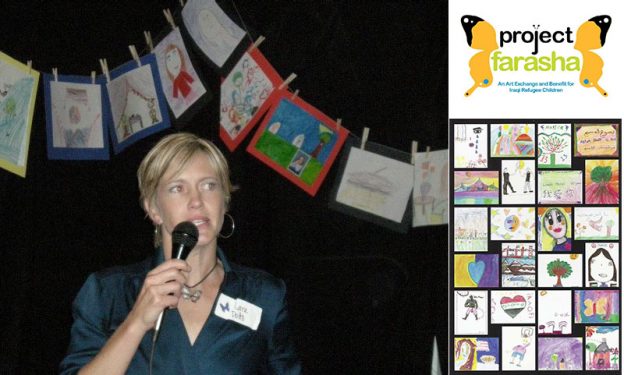 In 2006, angry and sad, I conceived of an art exchange between Bay Area
and Iraqi children. The community raised $75,000 for medical treatments
and education for Iraqi Refugees.

In the following years, like many, my awareness of the continued and lasting effects of that war got swallowed up by kid’s baseball schedules and a busy career.  But there is one place I am always reminded of how lucky I am to worry of such things and that is on Deer Hill Rd, under the shadow of those white crosses.  The mother, the architect and the peace activist in me all know and you must know too……… that this is a sacred Place worth preserving.

Since 2013 I have found myself in a small role within the Crosses Advisory Council serving in an architectural capacity.  I have organized and participated in workshops to help them envision the future of the memorial and have helped them with their internal organization, branding and capacity building.

The memorial faces imminent changes to site conditions and property entitlements but the group remains relentlessly committed to preserve their mission which is: “To inspire peace by prompting individual and public reflection on the tragic costs of war”

I am humbled by the commitment of these people, yet, the cultural and historical legacy of site has grown far beyond them and has become part of the fabric that defines our community.  It is a living example of place making; where a civic space is created through and by the inspiration of the community itself.

So what will the future hold?  The time is coming when you will be asked what the hillside means to YOU?

For me, the Crosses represent a commitment to peace.  The message goes beyond country, race, politics, or religion.  It starts inside and it radiates.  I moves from words, to actions, to policy ………and it is hard work.   The founders have taught me this much by example:

What I am finding is that peace activism is not entirely unlike creativity.

I hope you will visit, The Peace Chamber, The Crosses of Lafayette Re-counted which will open to the public free of charge January 2017 at the Jennifer Perlmutter Gallery.   http://jenniferperlmuttergallery.com/

To donate to the on-going maintenance efforts for the Crosses follow this link. http://ourpeacecenter.org/programs/