This summer I was honored, along with 6 other local architects and landscape architects to moderate a community design workshop to envision the future of the Lafayette Crosses.

This came after a moment of authentic stomach turning sadness.

On a cool day in late spring, I drove by the crosses and realized I wasn’t looking anymore. I drove around the block and stopped in front of the dry and overgrown hill and cried. I must’ve at that moment realized the crosses would inevitably have to change. I besieged the internet looking for ways to reach the founder of the crosses foundation and express my concern and willingness to help.

After several failed attempts, I ended up reaching Jeff Heaton, the brave soul who hammered the first cross into the ground and remains the voice for its message. I was inadvertently immersed into vigorous debate amidst the original organizers, the property owners, and city officials about the future of the crosses. As peaceful as the hill seems nowadays….I can assure you, the passion of the original organizers and the urgency of their message is not so placid.

Meanwhile a photography exhibit entitled “A Protest against Forgetting” was being hung by Architect and curator Carol Reif in a periphery room of the Lafayette Library.

The photography, by acclaimed artist, Binh Danh was a nostalgic portrayal of the crosses and of the volunteers relentlessly maintaining the prominent hillside. The exhibit emotionally transported me back in time to 2007 when the images were instead of a “shock and awe” campaign….complete with Iraqi children on gurneys, and of course the nightly death count of our own sons and daughters. The most striking element to the exhibit for me was the Title, where the word “Protest” caught my attention and I wondered….

Is it possible for a permanent public war memorial to ever capture a sentiment of protest and simultaneously the depth of mourning and gratitude that is due to the fallen soldiers and their families?

This question was one of many, both esoteric and practical that was pursued in June at the Mt Diablo Peace Center with a small but dedicated group of individuals. The task was to brainstorm and record ideas about what a permanent Memorial in that location might be. 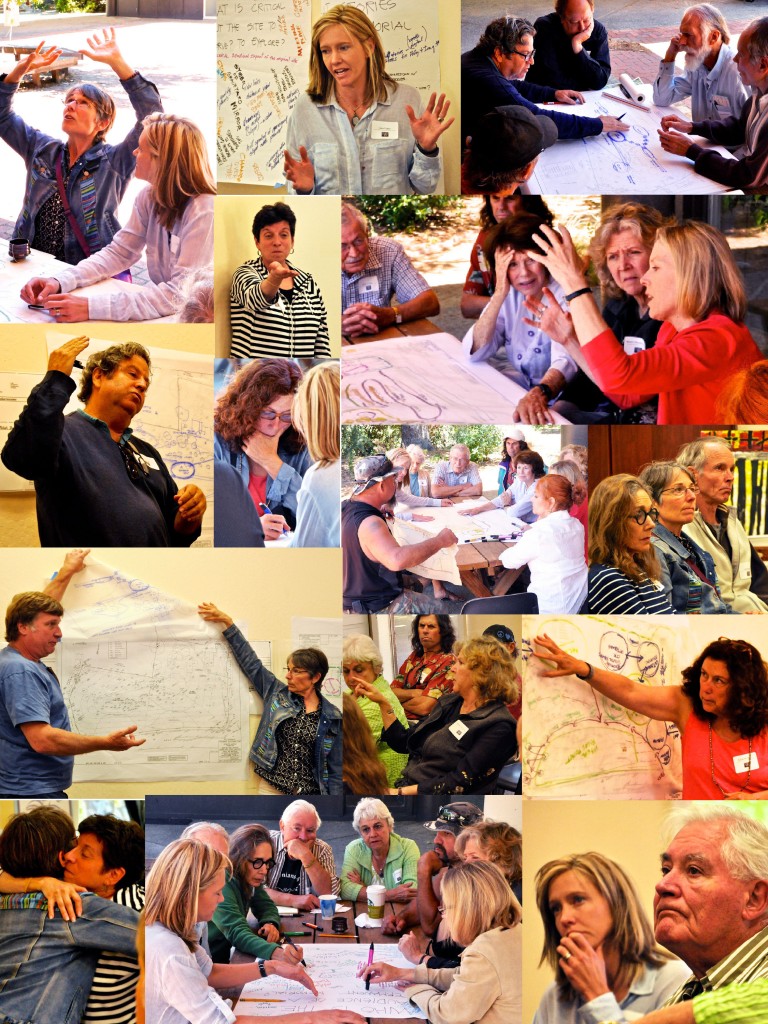 The workshop was organized by Carol Reif and the moderators included renowned architect, Robert Swatt, landscape architect Pam Winther, Lucia Howard, and Vincent Palmer. The attendees about 20 in all collaborated in a highly functioning manner despite their sometimes passionate differences in what seemed plausible, beautiful or appropriate. I was inspired and in “awe” of this unique group of volunteers who have accomplished no less than a historical civic act. There courage and continuing message of peace is relentless.

“My great wish is that we thoughtfully consider the permanency of our memorial, a memorial that conveys an equal message to that of the stark white crosses on the hillside, something that people would want to visit from all over the world as they have to the hillside. It should be a place where people come to remember and reflect on the cost of war.” offers Baika Heaton, an organizer since 2006.

The results of the workshop are sketches and notes and initial talking points to explore the design and feasibility of a Peace Memorial with city officials and property owners.

There have been suggestions that a global design competition might be held asking architects and artists with an “international reputation” to participate. Others, like Carol Reif, believe that what started as a grassroots movement ought to look inside its own community for the design solutions.

This workshop was the first step of what will surely be a long and remarkable community design process. There will be many formal avenues for input as the project develops. From what I can tell, everybody has a feeling about those crosses and all feelings are valid.

In the meantime, while we consider what a peace memorial ought to look like, feel like, include or not include…… let’s not forget or we will find ourselves in search of another hill.

As the next steps to a permanent memorial unfold, the crosses will remain on the hillside. Here are a few facts to remind you and some external links if you would like to know more.